The relationships that both Nassau and Suffolk Counties have in regards to the stewardship of waters that both surround and provide drinking water are historically complex. Both counties are dependent on the ocean and sound to provide critical tourism and recreation services, as well as provide a boost to real estate markets. Long Island’s waterfront real estate is among the most prolific in the country. This valuable real estate generates property taxes that help to fill the coffers of local governments across the Island. Underground, Long Islanders pump freshwater that supports industries, residential and commercial needs from the nation’s first federally designated sole-source aquifer. The complex system is already being threatened by poor land use planning and policy decisions. To further exacerbate the groundwater system’s troubles, the threat of sea level rise due to Global Warming is seen as a threat to Long Island’s drinking and surface water quality. According to research gathered by the US Environmental Protection Agency (EPA):

A rise in sea level would:
(1) inundate wetlands and lowlands
(2) erode shorelines
(3) exacerbate coastal flooding
(4) increase the salinity of estuaries and aquifers and otherwise impair water quality
(5) alter tidal ranges in rivers and bays
(6) change the locations where rivers deposit sediment
(7) increase the heights of waves
(8) decrease the amount of light reaching the bottom of sea beds. Previous assessments have mostly focused on the first four factors.[1]
The below Suffolk County Storm surge maps provide good insight as to what Long Island would look like if sea levels rose due to Global Warming. Storm surge flooding can also serve to simulate Global Warming sea level rise: 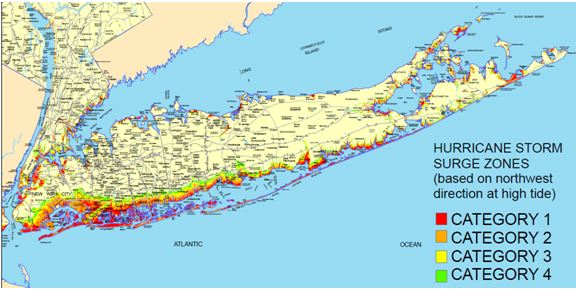 Tide gauge measurements show sea level on Long Island has risen nearly 11 inches over the past century. Much of that’s due to global warming, said James G. Titus, an expert in rising sea levels at the federal Environmental Protection Agency. Many scientists expect the trend to accelerate as greenhouse gas emissions increase, and they’re urging communities to plan ahead.
The Goddard Institute for Space Studies and Columbia University’s Earth Institute predict sea levels around Long Island could rise as much as 4 1/2 feet over the next 70 years. That could mean greater threats to the homes of nearly a half-million residents who live in the low-lying South Shore floodplain, according to estimates by Nassau and Suffolk officials.[2]
The EPA has done extensive research on the impacts elevated seas will have on groundwater resources:
The impact of sea level rise on groundwater salinity could make some areas uninhabitable even before they were actually inundated, particularly those that rely on unconfined aquifers just above sea level.
The below graphic from the EPA contains three illustrations, each depicting sea level rise on different water table elevations:
The first illustration, figure 7a, depicts an area where freshwater is plentiful and sea level rise has had little effect. The second and third illustrations, figures 7b and 7c, depict the outcome of sea level rise where freshwater is less plentiful. In figure 7b, an area with more elevation the sea level rise is less of a problem. In figure 7c, a low lying area, the amount of freshwater under ground has declined: 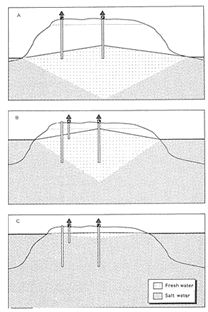 [3]
Areas of Long Island’s low-laying south shore and narrow north fork are especially in danger of salt water intrusion, which is already a problem due to over pumping. Long Island is best represented by both scenarios B, which would represent the water table on the north shore and the glacial moraine, and C, which would represent the flood plain along the south shore.
The practical importance of distinguishing erosion from inundation varies (Park et al. 1989). Along the very low deltaic coasts, erosion would merely reclaim land a few decades before it was inundated anyway. On barrier islands and sandy cliffed coasts, however, where a one meter rise would only inundate 5-20 meters of beach, erosion would account for the majority of land lost.

(A) Initial condition. (B) Immediate inundation when sea level rises. (C) Subsequent erosion due to sea level rise. A rise in sea level immediately results in shoreline retreat due to inundation, shown in first two examples. However, a 1 m rise in sea level implies that the offshore bottom must also rise 1 m. The sand required to raise the bottom (X’) can be supplied by beach nourishment. Otherwise waves will erode the necessary sand (X) from the upper part of the beach as shown in (C). Source: Titus, 1986.[4]
Fears of sea-level rise impacting aquifers are a concern to areas as close as New Jersey, which:
Sea level rise can enable saltwater to penetrate coastal aquifers. Aquifer salinization may be compounded during droughts or in regions with significant overdraft (when water is extracted from the aquifer faster than it can be naturally replaced), because the aquifer may lack sufficient water pressure to prevent the ocean from backing up into groundwater. The Potomac-Raritan-Magothy aquifer system in particular is an important water source for residential and industrial centers in the coastal region of southern New Jersey (Luzier, 1980). During a drought in 1961-66, the salt front (defined as 100 milligrams/liter chloride) moved 50 km inland and salt water recharged the Potomac-Raritan-Magothy aquifer, increasing chloride concentrations in wells 10 to 70 mg/liter above background levels (5-10 mg/liter) (Camp Dresser and Mckee, 1982; Hull and Titus, 1986). These chloride levels remained elevated for more than 10 years.
Aquifers provide the sole or principle source of water for at least 14 of New Jersey’s 21 counties and the Coastal Plain Aquifer System covers all of central and southern New Jersey (U.S. EPA, 1988). In addition, much of New Jersey is dependent on coastal watersheds for water. A 0.61 m or 1.22 m rise in sea level over the next century would allow the salt front to advance further upstream in watersheds and permit saline waters to penetrate coastal aquifers. The increasing salinity may contaminate drinking water supplies and limit the water available for agricultural and industrial uses. In response, New Jersey’s would be required to regulate and drastically reduce water usage or find alternative supplies of water at substantial cost (Hull and Titus, 1986).[5]
…to as far as Island County Washington, where they reported on the potential challenges in their Draft Shoreline Inventory and Characterization:
Saltwater intrusion into sole-source aquifers, and potential exacerbation from sea level rise[6]
In New York, the DEC has issued its report to the State Legislature on sea level rise in December of 2010. In the report, the DEC identified the challenges posed by sea level rise to the sole source aquifer, with their concerns being in line with those of Washington State, New Jersey and the US EPA:
Saltwater Intrusion
As seawater rises, it encroaches upon estuarine, brackish and freshwater environments, increasing their salinity and permanently altering ecosystems. Saltwater intrusion also threatens aquifers and other freshwater sources of public drinking water.
Drinking Water Supplies
Salt water intrusion threatens potable water supplies, especially on Long Island, where salt water intrusion into the sole source aquifer would compromise drinkable water for hundreds of thousands of people.
Rising Water Table
Higher groundwater levels may submerge infrastructure elements, interfering with their function and preventing access. Failed septic systems can create public health problems and harm ecosystems. Saline groundwater can corrode vulnerable infrastructure components. A higher water table also reduces the ability of the soil to absorb runoff, increasing the likelihood of flooding. [7]
The principle concerns of the DEC go beyond the issues highlighted above. Failing septic systems being submerged in a rising water table are a risk for low coastal areas, and accelerated coastal erosion due to increased wave action and more powerful and prevalent Nor’Easters and Hurricanes:
Bluffs are relict features of the shoreline, meaning they were formed by processes that no longer take place. As a result, coastal bluffs can remain stable or they can erode, moving landward as they do, but they will not increase. Bluff erosion supplies the materials that form other shoreline features: clay, fine silt, sand, gravel and boulders.
Rising sea levels combined with frequent, intense storms are likely to increase severe bluff erosion.[8]
Erosion is detrimental to the ground and surface water quality for various reasons. First, the accelerated loss of coastal land can change the balance of salt and fresh waters, as well as the wetland formation that creates natural vegetative filters that protect surface waters from storm water runoff. While wetlands can be recreated gradually as sea levels rise, developed lands in areas beyond protected wetland boundaries would constrict the creation of new wetlands.
According to the DEC, the worst case scenario shows sea levels rising 41 to 55 inches (3.4 to 4.5 feet) by 2080: 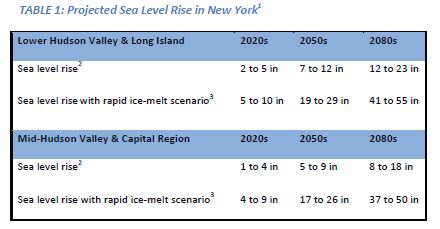 Below, a GIS map of areas of Suffolk County most vulnerable if sea levels rose 4.5 feet: 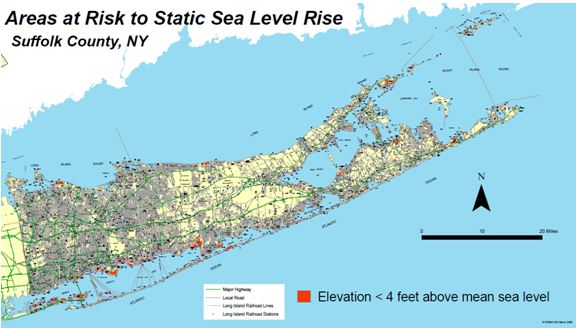