The following Letter to the Editor was published in Newsday on May 11th, 2020. You can read the original version here.

The latest efforts to bring high-speed rail to Long Island fail to meet the region’s more immediate infrastructural needs [“Push for 200 mph train from NYC to Long Island to Boston,” News, May 10].

While planners should always look towards the horizon with a hopeful eye on progress, the most important task of envisioning for the future is crafting realistic and responsive plans.

In 2016, the federal government suggested NEC Future, a high-speed rail proposal to modernize the Northeast Corridor used by Amtrak that this latest attempt echoes. The plan was scrapped when the federal government instead opted to upgrade existing infrastructure along the northeast corridor – a move that they argued would net the greatest benefits for riders with minimal environmental impact.

Instead of bringing high-speed rail to Long Island at this time, policymakers should focus on encouraging transit ridership post-pandemic, and hardening our transit system by taking steps such as replacing the Long Island Rail Road tunnels beneath the East River, or expediting electrification east of Ronkonkoma.

Planning is essential to ensuring a sustainable future, but such efforts mean nothing if they eventually wind up sitting on a dusty shelf. 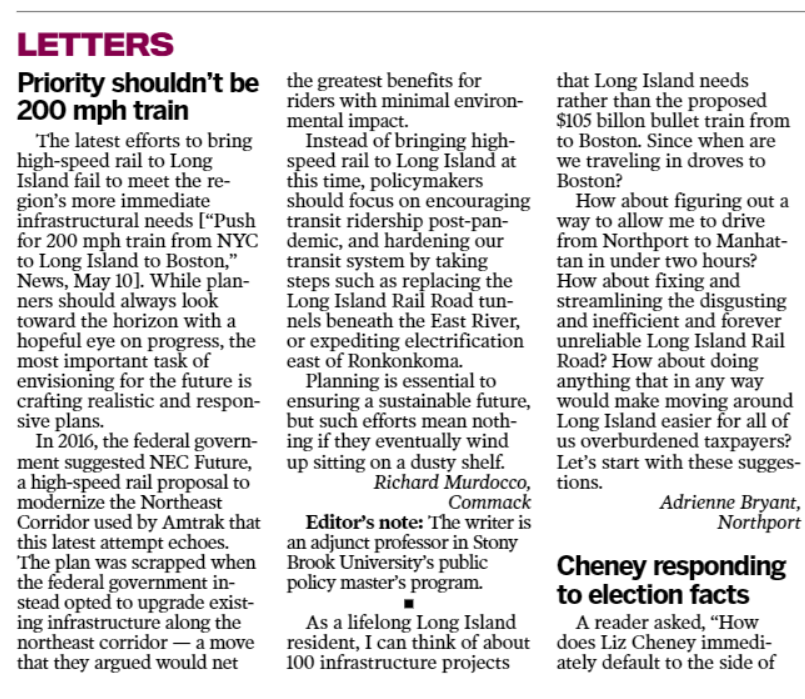 Richard Murdocco is the founder of The Foggiest Idea, an award-winning resource on real estate development. Murdocco serves as an adjunct professor in Stony Brook University's public policy graduate program, and speaks on land use issues in communities across the region.

View all posts by: Richard Murdocco

TheFoggiestIdea According to the latest #coronavirus metrics, there were no COVID-related deaths on #LongIsland yesterday. The 7-da… https://t.co/Od029c2NGO
Jun 10 • reply • retweet • favorite

TheFoggiestIdea Across both #Nassau and #Suffolk Counties, there were no recorded deaths from the coronavirus yesterday. This is th… https://t.co/T3mVNj0RMk
May 19 • reply • retweet • favorite

TheFoggiestIdea As part of a larger effort to build a data vault that showcases key metrics about the Nassau/Suffolk region,… https://t.co/84EZIhcwU0
May 14 • reply • retweet • favorite