The following appeared in the East Hampton Press, The Southampton Press and 27East.com.

Long Island’s East End is unlike any other area of the New York metropolitan region, with its ample fields and a low-slung sense of rural ease that is not felt anywhere else on suburban Long Island. Thanks to a potent mixture of the area’s historic agricultural land use, innovative farmland preservation programs undertaken by Suffolk County in the 1970s, and an overall commitment to open space protection, Long Island’s suburban expansion has, for the most part, stopped at the William Floyd Parkway.

However, the tides may be shifting for Long Island’s last bastion of what some would call New York’s bucolic paradise. In recent years, a pro-development attitude has developed in western Suffolk County—and the fields of the East End may be next.

Sound land use practices on Long Island are primarily grounded in two principles: a balanced approach that factors in an area’s social, environmental and economic needs; and strong data and policy analysis to drive land use recommendations. In the past, urban planners would sit with policymakers and residents, and together work to hash out a vision for a particular area. When crafting this vision, the planners would work to factor in the nuances of neighborhoods, study unique aspects of the environment, and take inventory of what a community both does and does not have.

In western Suffolk County, this practice of community or environmentally driven planning has fallen by the wayside for a growth model that gives preference to vested stakeholders and nonprofit organizations that have something to gain by increasing Long Island’s developmental density. These groups come from the housing and building world, using buzzwords such as “smart growth” and “walkable” that have long ago lost their legitimacy as excuses for municipalities to increase their unit yield.

As the recent approvals granted by the Town of Islip to the decades-long stalled Heartland Town Square and Islip Pines projects show, there has been an abrupt change of philosophy toward growth in the township. Islip isn’t the only western municipality to shift its views, as frequent smaller projects are granted density increases beyond the as-of-right allowances in the towns of Babylon, Huntington and Brookhaven.

Suffolk’s western municipalities are moving full steam ahead on projects that wouldn’t have been approved 15, 10 or five years ago. It is almost as if the western Suffolk towns are blissfully unaware of the fact that Long Island’s water quality is severely degraded, or that our road network is overtaxed. While policymakers grandstand about the importance of water protection, they approve subdivision after subdivision at the same time.

You may be thinking, “What about sewers? Can’t you sewer your way out of the problem, as Suffolk County is looking to do?” Perhaps to a point, but the critical infrastructure expansions currently being proposed are costly and relatively small in scale compared to the massive scope of what is needed. Unless there is a windfall of funding and public will, we need to rethink our addiction to development. Despite technological advances that can be made, there is a carrying capacity to our island, as defined by our roads, open spaces and, most importantly, aquifer systems.

In order to achieve truly smart growth that will allow Long Island to withstand demographic and economic shifts, we need to balance our regional environmental, economic and social needs. We need vibrant downtowns, but they need to be paired with a vibrant economy that is multifaceted. We need the infrastructure to support such growth, and we need to start taking our water protection seriously. The numbers, studies and trends don’t lie. If we as a region don’t change course, we’re in for a rude awakening.

These decidedly pro-development attitudes are morphing the way Long Islanders discuss regional issues. What was once a process grounded in science, data and urban planning theory is now based on vested interests and stakeholder agendas. While the concept of walkable downtowns placed near transit nodes is grounded in valid planning theory, in practice many of the projects being approved in the western portion of Suffolk County don’t consider the limitations of infrastructure or market demand for commercial and retail space, both of which are critical to successfully implementing the concepts.

The East End may just be the last safe haven of sound urban planning principles on Long Island. While townships west of the William Floyd Parkway seem like they are part of another world, regional projects built in western Suffolk County have impacts that resonate islandwide. Should Long Island’s eastern towns follow their western neighbors and concentrate their development efforts around existing Long Island Rail Road stations? Yes, but in a controlled manner.

In order to protect the East End, both town and village governments need to depart from the patchwork system of approvals that vary from township to township, and instead adopt a true comprehensive strategy to their development efforts. By engaging in a regional approach, Long Island’s future won’t be charted by municipalities who can’t see beyond the fishbowl of their own borders and taxable properties. Instead, the future years will be crafted by professional planners, guided by data and the input from members of communities across the region.

The East End doesn’t have to fall victim to the trends and buzzwords of the west. With sound planning, we can adapt our growth model to accommodate the needs of the entire region. Only then can Long Island successfully start the important work of righting its regional wrongs, balancing the need for economic growth with the mission of environmental protection.

Newsday Letter to the Editor: Housing and the Market 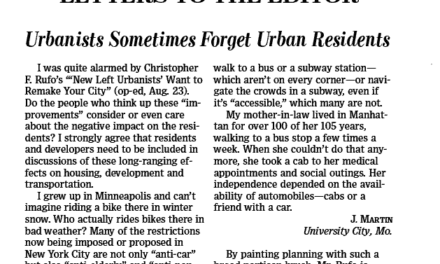