Long Island has a few development concepts that just won’t go away.  These concepts go beyond the generalities of “smart growth”, “walkable” and “downtown-feel”. These are huge and lumbering big-picture projects with regional significance that have been kicking around and surfacing time and time again since the 1960s.
As a fan of taking a regional approach, I enjoy when these big projects resurface, because they bring critical planning issues into the regional spotlight for a day or so. As a fan of sound planning however, some of these ideas need to stay on the shelf.
Often, you’ll see every five years or so you’ll hear the following:
Let’s allow the Seaford-Oyster Bay Expressway to finish its northward course, culminating with bridging (or more recently, tunneling under)the Long Island Sound from Bayville to Rye.  Or, how about we create a bridge (or more recently, a high speed rail tunnel) on the East End to New England? Speaking of rail, why don’t we add a light rail down the center median of the Long Island Expressway.   Let’s build a mini-city on the Pilgrim State Property in Brentwood. Let’s rebuild the Nassau HUB. Let’s build a regional shopping mall in Syosset.  Toss in whatever wacky idea Riverhead is contemplating for the former Grumman airport in Calverton, and you have a diverse portfolio of regional concepts that have been bounced around for decades.
This piece will explore two of the above ideas: bridging the Long Island sound from Bayville to Rye, and the recent notion of a high speed rail link to New England. The rest of these proposals deserve their own dedicated articles.
The Bayville to Rye bridge/tunnel notion is as old as the Seaford-Oyster Bay Expressway (NYS Route 135) itself. The bridge was to be Robert Moses’ last great public work. However, the proposal was slowed by the soon-to-be impacted property owners, and ultimately killed by lack-of-follow through by then-governor Nelson Rockefeller. Since then, the proposal has been bouncing around now and again. The goal of this proposal is to further widen the metropolitan bypass, which is a connected network of highways that allow motorists to circumvent the New York Metropolitan Core area in their travels north, south and west.
The below picture highlights the existing metropolitan bypass in bright green. The proposed bridge/tunnel expands this bypass along already-built routes (dark green) up to the proposed expansion of NYS Route 135 (shown in blue), across to Rye, New York: 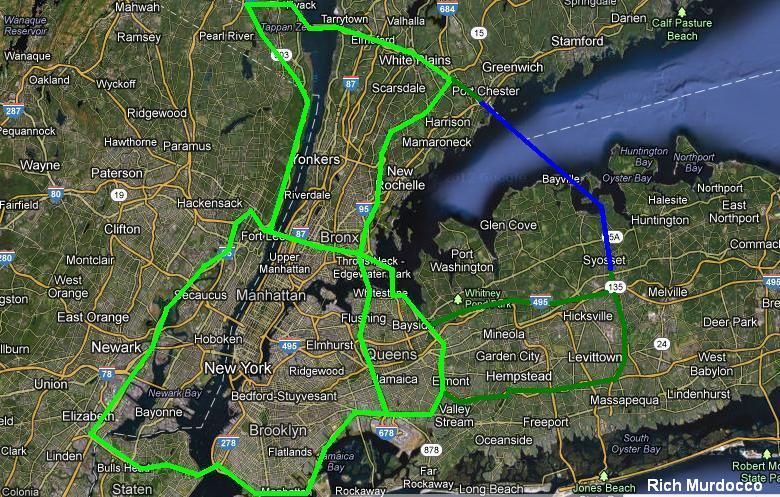 While the logic to extend the bypass out “east” to Oyster Bay made sense in 1962, the concept no longer holds up. Today, thanks to population growth and suburban expansion eastward in the 1970s through 1990s, the metropolitan bypass should be linked to New England much further east than was proposed in the 1960’s. If the circular bypass were to be expanded, it should be done so on the North Fork.
Planning theory aside, the logistics of the proposal are daunting. First, land acquisition costs on Nassau County’s gold coast are astronomical. Second, there is a litany of state and federal protected wetlands where the approaches to the bridge/tunnel are supposed to be, that protect the shorelines of both Westchester and Long Island(which are the byproduct of the previous fight to halt the Bayville-Rye bridge in the past). Lastly, and most importantly, there is a distinct lack of public will to see the proposal be built. While it is fun to pontificate, it may be time to put this one to bed.
For more information on this proposal, I highly recommend reading Robert Moses: Single-Minded Genius, which was a collection of scholarly essays written after a Hofstra University symposium in 1988 celebrating Robert Moses’ 100th birthday and exploring his legacy. One essay in particular describes, in detail, the bridge and ensuing fight over whether or not to build it.
The theme of expanding the metropolitan bypass can be seen in the newest proposal to link Long Island with New England via a proposed high-speed rail line. While one should be cautious with any federal plan that looks 25 years in the future, the concept makes sense.
Currently, Long Island is a dead-end cul-de-sac. Freight shipments must travel 60+ miles east from the urban core and 60+ back west. Travelers must follow this same pattern link up to New York City’s rail connections just to travel back west once they’re in Connecticut. Ferry services mitigate this issue, but what is needed is a comprehensive infrastructure upgrade on the North Fork that goes beyond the current proposal for light rail by the federal government. To be honest, I don’t feel there is enough ample demand regionally to justify a high speed rail bypass of Manhattan. The high speed rail plan is sound, but the concept should be altered. If anything, the federal government should invest in the Northeast corridor and ignore Long Island all together. Instead, we should invest easing up the movement of our freight.
What Long Island needs is an entry/outlet for freight on the East End, either in the form of a mid-sized port. The former Shoreham Nuclear Power Plant parcel would be a good fit for this use. The parcel is already developed, industrial in use, and insulted. Less feasibly, we can construct a dedicated freight rail tunnel or resurrect the notion of a jetport in Calverton. The flow of goods must have a way of exiting the current dead end that is the twin forks region. Similar to the Bayville-Rye Bridge, there are substantive hurdles to overcome for any of these proposals to get off of the ground so the likelihood of implementing any of these suggestions are slim to none.
On Twitter, I sometimes use the hash tag #ThinkRegionallyto denote my preference for large-scale comprehensive thinking that transcends geopolitical borders. However, the proposed regional development is often out of touch with the times. These types of proposals are counter-intuitive to accomplishing the goal of regionally strategizing and addressing Long Island’s needs. With each big idea pitched that sits on a shelf, the public becomes jaded to any future project, no matter how valid it is.
We, as a region need to think big, but need to remember that our problems are constantly evolving with the times. Our policy solutions must do so as well.

The Real Deal: The Start of a New Industrial Era for Long Island Developers?