The Brookhaven Town Board Public Hearing on Sandy Hills

On July 19th, 2011, I read a statement advocating for sound environmental planning for the Sandy Hills proposal, a 135 multifamily development proposed for a 39.3 acre parcel. The proposal is in a state-designated Special Groundwater Protection Area (SPGA), and the Suffolk County Planning Commission has rejected the merits of the proposal’s planning merits in it’s staff analysis, despite the Commission’s approval of the project. Here is the North Shore Sun’s recap of the meeting: http://northshoresun.timesreview.com/2011/07/14426/live-updates-brookhaven-town-board-meeting-3/

The North Shore Sun also quoted me for their July 20th story on the issue, which can be found here:

But representatives from the Long Island Pine Barrens Society described the plan as “flawed” and said it “exhibits poor planning principles.”

Richard Murdocco, who addressed the Town Board on behalf of Pine Barrens Society executive director Richard Amper, said the land should be preserved since it is located in the compatible growth area of the Pine Barrens and has been recommended for open space acquisition by the town’s Carmans River Study Group.

“This proposed intensification of land use in a sensitive and threatened watershed is an action that is in direct contrast with the town’s recent preservation efforts,” Mr. Murdocco said, referring to the town’s Carmans River Watershed Protection & Management Plan. That report is in the process of being finalized.

The text of the statement read can be found below the picture: 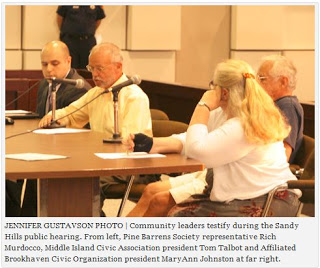 7/19/11
Re: Public Hearing #4 Sandy Hills LLC Change of Zone
My name is Richard Murdocco, and I am speaking on behalf of Richard Amper, Executive Director of the Long Island Pine Barrens Society.
Sandy Hills is a proposal that is flawed and exhibits poor planning principles. The parcel is located in the Compatible Growth Area of the Pine Barrens, and is in a designated Special Groundwater Protection Area.
Intensifying the land use on this thirty-nine point three (39.3) acre parcel well-beyond what is currently allowed as-of-right must be justified. What are the tangible public benefits of granting the developer such an increase above as-of-right yield? The public must accrue true benefits that go beyond mere impact fees that will result if this proposal is built.  “Workforce” housing is a term that is without meaning, so the suggestion that this counts as a substantive public benefit is ridiculous. Is the applicant proposing $250,000 workforce housing, or is it workforce housing that is priced at $500,000?
The Suffolk County Water Authority, in letter from July of 2008, had stated that the increase in density in relation to the proposed number of Pine Barrens Credits is an “insult to the TDR program.” The Suffolk County Planning Commission, in its 2007 review of the proposal, had issues with the proposed sewage plant in a Special Groundwater Protection Area and the lack of Pine Barrens Credits slated to be redeemed in exchange for the increase of density.
The Sandy Hills proposal was the subject of extensive litigation, resulting in this reconsideration.
In the staff analysis of Sandy Hills by the Suffolk County Planning Commission, it was highlighted that the proposed yield is to be 135 residential units. This is a difference of 102 units, or the as-of-right yield is approximately 25% of the proposed yield. The Commission had stated that “the Proposal provides no substantial public benefit to the community impacted by this increase in density”. Further, the Suffolk County Planning staff has said that the applicant shall retire 19 Pine Barrens Credits to achieve the requested density. In contrast to this recommendation, 3 credits are proposed to be retired by the developer. In closing their document, the Suffolk County Planning staff has stated that “…the approval of the proposed plan would simply be a ‘density grab’ and serve to further exacerbate the ramifications of unplanned and uncoordinated suburban sprawl.”
The Sandy Hills project relies on the Middle Country Road Land Use Plan, which has been severely criticized by Long Island planners for being not comprehensive in its analysis of traffic and environmental impacts along the corridor. The project is not located downtown, is not near public transit and does not constitute “Smart Growth.”
Furthermore, the Sandy Hills parcel has been identified by the Carmans River Watershed Protection and Management Plan as a property that “should be considered for acquisition” due to its location in the heart of the river’s groundwater contributing area. This proposed intensification of land use in a sensitive and threatened watershed is an action that is in direct contrast with the Town’s recent preservation efforts. The parcel goes well above the specified zoning and density requirements as outlined in Article 6 of the Suffolk County Sanitary code. Couple this with the parcel’s location directly in the Carmans River watershed, and one can easily see the detrimental impacts to the environment.
It is at this time that the Pine Barrens Society is presenting Protest Petitions under New York State town law Section 265, and Sections 239-M and 239-N of the general municipal law. Regardless of the Town attorney’s opinion to the contrary, Brookhaven local law may not supersede, nor invalidate, state protections against rezonings opposed by more than 20% of the adjacent neighbors. While obtaining these protest signatures, residents of communities adjacent to the Sandy Hills Property expressed disdain at the idea of development, when there are so many new unoccupied and foreclosed units in the vicinity.  We also request a period for written comments on the Sandy Hills proposal be open for 15 days.
With so many indications, from such a variety of sources, that this project is wrong for Brookhaven, it would be counter-intuitive for the Town to approve it.