The following was recorded on May 30, 2018. You can view the original on CBS 2 here. The story published by CBS 2 New York is copied below.

Lawmakers have given an initial green light to a developer to come up with plans for a new destination development in the heart of Suffolk County. It could include the county’s first sports arena and convention center.

And unlike in other places, you wont hear many say “not in my backyard” when it comes to the project, CBS2’s Carolyn Gusoff reported Thursday.

Work is underway on a massive development in the core of Suffolk. The Ronkonkoma “hub” promises a pedestrian-friendly downtown going up on the north side of the Long Island Rail Road tracks.

But folks on the south side, near MacArthur Airport, don’t want to be left out of the tax revenue and improvements.

“We saw this parking lot in between a plane and a train as prime area,” resident Eileen Panico told CBS2’s Gusoff.

Panico and civic groups brainstormed what they’d like south of the tracks and now lawmakers have approved the first step toward this $1 billion, privately funded plan on 80 public acres.

In the suburbs, where “development” is often a dirty word, this is a twist on the NIMBY refrain.

And that vision is a destination hub that would have community ice rinks, a tech incubator, medical research, and retail and restaurants.

It’s centerpiece would be a reported 17,500-seat sports arena or a convention center.

However, talk of another arena is spawning debate. With the Nassau Coliseum recently refurbished and the NHL’s Islanders building at Belmont Park in Elmont, skeptics say Long Island needs to think regionally.

“When you consider projects on such a scale, you have to question how it fits into the larger regional fabric,” said Richard Murdocco, a planning blogger for thefoggiestidea.org.

The developer believes an arena is economically viable next to Long Island’s busiest train station.

“There could be a major opportunity here,” project engineer John Cameron said. “If you look at it, two-thirds of the NBA and NHL franchises are in venues with population venues less than Suffolk County.”

However, Cameron made it clear that if “there is no team, there is no arena.”

Supporters believe if you build it they will come. There are 1.5 million people in Suffolk County. It is similar in size to some large cities, including Philadelphia, and yet it does not have a single large arena.

The full Suffolk County Legislature is expected to vote Tuesday on whether to authorize the developer to complete a detailed proposal in the next eight months.

Quoted in the New York Times: A Beach in Manhattan 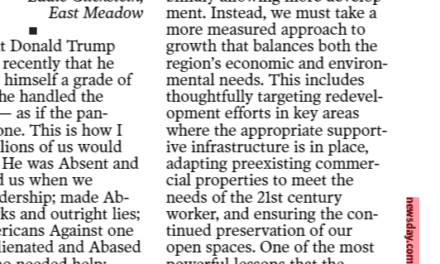